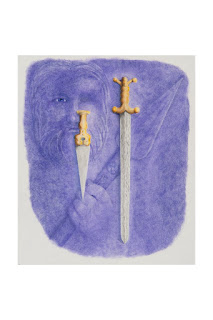 The illustration featuring Berand's sword Wolf-tooth and his gilt-handled dagger also shows a ghosting in of Wotan, the Alemanni's god of war. He was also god of poetry, royalty, knowledge of the runes, and spell-casting. Quite a resume!

Wotan was often imagined as a wanderer wearing a wide-brimmed hat and leaning on a staff. His weapon was a spear named Gungnir. Sometimes he rode a flying, eight-legged horse named Sleipnir between the land of the living and the underworld. His other familiars were two ravens and two wolves that would travel the world and bring the god all the news of his realm. He is shown with one eye. According to Teutonic mythology, he sacrificed his other eye at the Well of Knowledge in exchange for wisdom.

Wotan's name was invoked by warriors before every battle, but he was a fickle deity, sometimes choosing to turn his back on his supplicants and give victory to the enemy.

At the time of my story, Wotan had gained popularity over Tiwas, the original ruler of the pantheon, who was worshiped more in connection with law and order, although he, too, was a god of war.

Wotan gradually lost favor with the Alemanni when they were subdued by the Franks and were converted to Christianity beginning in about the fifth century AD. Wotan continued under the name of Odin with the Vikings and the Scandinavians as late as the twelfth century AD.
Posted by Unknown at 10:16 AM